Our Raw Milk Story, So Far 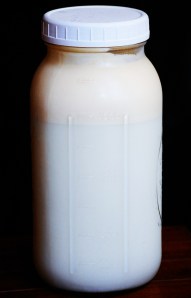 Half-gallon of our raw milk

After Elliot was born, I was landed into some of the most overwhelming months of my life. Connecting with and training my toddler, spending every other hour with a newborn nursing, fighting off depression due to “baby” weight and house-bound for the winter;  I was permanently exhausted for the first two months. Along with the physical demands I had such an urgent question invading my mind. “What next?”

I wondered what I was meant to be doing. For almost a year I had been anticipating a baby.  And now that our son was here (and such a delightful, laid-back, healthy guy) I wasn’t sure exactly where to place my need to create. At night my mind ran marathons and climbed mountains of possibilities. I knew I needed to become stronger and restore my body from pregnancy as well as lose weight. That seemed foundational. Paul and I had already been exploring the concept of living simpler and eating well.  We both desired to make changes slowly but surely.

Paul, being the quintessential engineer, put together an actual plan to transition to living simpler, on a spreadsheet with items to buy to enable us to change. A mill for wheat. An order of bulk wheat and oats. Cast iron pans to replace the chemically coated ones we’d been using.  As the winter and spring months passed we were able to switch our diet to more homemade and nutritious foods. Oe big problem remained, we were still purchasing pasteurized, homogenized milk from the store. True, it was organic but it basically remains a dead food, with all the goodness heated and blasted right out of it. It bothered me to think that it actually was harmful to be drinking such”milk”. We were paying $3.99 per half-gallon of Organic Valley milk.

In 2010 we were able to get raw milk under the table sporadically through farmers my parents knew of. That farm was taken over and we were at a loss for any other sources. Unless, we were willing to drive for more than hour, which for us would either delete our precious weekend or mean some tricky dropping-off-driving-out-of-the-way business since we  have one car. I was at my wit’s end. One night I as I held my baby, awake, mind going over the issue again, I turned to Paul and shook him slightly. He murmured and I asked, “Paul, could you pray for a source of raw milk?” He laughed a little and said, “Sure, honey…” So right there he did pray a to-the-point prayer asking for the Lord’s will and if we could be blessed to find a source of raw milk.  Ah, my husband is a sweet man, isn’t he?

In the days following he encouraged me to look online. We found a website dedicated to helping people find local sources of dairy, meat, fruit and vegetables. We were excited to see how much was out there but it was disappointing to see that so little of the dairy was certified raw. ( To advertise raw milk here in NY state is to ask the Feds to come knocking on the door to shut you down.) Also, most of the farms were, again, over an hour away. My husband, in his dedicated way of wanting to fulfill my wishes, said, whatever it took, he’d commit to driving out if necessary.

He and I put together a list of possible farms to call. We also mentioned our dilemma to our neighbors. Our neighbors, who came to the city from a rural farm, had owned a cow and sorely missed the abundant raw milk.  They were interested as well.  So, two weeks after the late-night prayer, our neighbors heard about a farmer that was holding a meeting at our midwives’ house/clinic here in Buffalo.  Apparently he was willing to deliver raw milk to the city.

We joined our neighbors and just a few other couples in midwife’s gracious receiving room, eagerly hoping for this to work out. The rosy-cheeked young farmer went over his “mission statement ” of purity and devotion to milk in its original state. I was amazed and thrilled, he was more than I could have hoped for in his wealth of information and commitment. (It felt a little exciting to be buying “black-market” milk but the seriousness of the stake out on farmers is infuriating as well this attack on basic freedoms to buy what foods we choose.) He explained the way we were going to legitimize the process. We would pay an up-front cost for a herd share,  so we’d actually be buying part of cow– since the government hasn’t disallowed the consumption of milk from your own animal.

Our farmer was, indeed, willing to deliver to Buffalo for an extra $3.00 on top of the $5.00 charge for a gallon of milk. In a matter of minutes, everyone present had signed up for the herd share and the delivery spot was volunteered. We now have been getting 2 gallons of perfect, creamy, life-giving milk for months now. Also, we just have to walk two doors down to pick it up at our neighbors! I think it’s safe to say our prayer was answered above and beyond.  I am also steadily making a gallon of yogurt a week, it’s addictive. I am thankful beyond measure.

28 Sep This entry was published on September 28, 2011 at 8:21 pm and is filed under The Basics. Bookmark the permalink. Follow any comments here with the RSS feed for this post.